Welcome to our foreign rights page. The titles presented below are all available for foreign languages editions. If you are interested in considering any of our books for translation, please do not hesitate to contact us. You can also download our latest Rights Catalogues.

After the critical and commercial success of her two previous books (How to Catch a Rainbow Trout & Just Like Turtles), Marie-Christine Chartier’s third novel is a deeply human story that delicately explores the themes of love, trust, abandonment and grief. On the surface, Jake and Émilie don’t have anything in common. But over evening chats washed down with Sprite, the pair will develop an unlikely friendship. Their bond is a testament to the hope that even on the darkest nights, the stars are shining somewhere. A story of friendship fuelled by snack-bar poutine and inedible gas station sandwiches. A teen romance, in spite of the whiffs of warm beer and sweaty bodies during a summer heat wave. A story from an era when phones weren’t quite so smart. A book with dual timelines, infused with gentle nostalgia and irresistible humour. This summer-tinged read will delight young readers, especially Generation Y audiences.

After tackling grief with In Between and abortion and breakups with Love Disorders, no theme is too difficult: Leslie & Coco takes a look at consent and the search for self. From the Gaspé Peninsula to Montreal, two friends are on the threshold of adulthood: Leslie is fragile and talented, while Coco is confident and hungry for thrills. This one summer will change the course of their lives forever. Two worlds collide in a novel that unites the opposing forces of Coco’s wisdom and experience and Leslie’s rage and clumsiness. Beyond these differences, the two have one thing in common: writing.

"Marie Demers signs here her best novel and, above all, her most luminous, insofar as the friendly relationship becomes synonymous with hope. Leslie and Coco know each other better than anyone else, but they only owe each other what they wish to owe each other: this is the beauty and strength of a friendship that resists."—Le Devoir 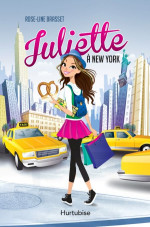 With more than 600,000 copies sold, Juliette is one of Canada’s bestselling series for young readers! Its success reflects not only a growing number of young girls who are interested in travelling, but also the important role family and friendships play in their lives.

Juliette is thirteen years old and lives with her mother, a rather eccentric freelance journalist. Each volume follows Juliette as she accompanies her mother to a new destination where her job is to write articles and travel guides. Mexico, Tokyo, Athens, Hollywood, London, San Francisco, Rome, Hawaii, Paris, Amsterdam, Havana, Barcelona, New York... Juliette’s adventures are only beginning! So far, the series includes 14 novels and 4 comic books.

“What’s cool is that the author hasn’t just created an exciting new literary world with this book—it also acts as a diary and travel guide, written such that the reader can experience a trip to New York along with Juliette. It’s a simple story that is both refreshing and informative.”—Le Journal de Montréal 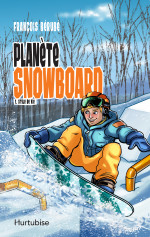 The author’s first series, Planet Soccer, was a critical and commercial success and sold more than 31,000 copies. His second series, Planet Hockey, has proven equally as popular among young readers: to date, there have been over 28,000 copies sold and all titles have made it onto bookstores' bestselling children’s books list. For children aged 10 years and up.

Author, teacher, father, and avid reader, FRANÇOIS BÉRUBÉ knows just how important it is to get young boys reading. His popular series were born from a desire to give readers a story that would spark imaginations.

To subscribe to the foreign rights newsletter, it's here!